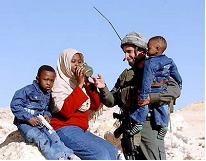 “Co-existence”, peaceful and even friendly co-habitation of different ethnic, religious and other groups, would be the ideal status, unfortunately never in the world fully achieved. There is a lot to do to reach this ideal state of affairs, and there are not many states on earth where so much has been done with so much success within such a short time as in Israel.

Co-existence’s antonym, “Apartheid”, (literally separateness), would mean racial discrimination, defined by the UN as “…any distinction, exclusion, restriction or preference based on race, color, descent, or national or ethnic origin…”. Unfortunately, by this definition apartheid is ‘alive and well’, not only in the third world, but to some extent also in the West – but not in Israel.

Though of course not perfect, in fact, Israel is probably one of the best examples of good co-existence against all odds, and one of the least racist states on earth. Let’s see the facts. To begin with, Israel’s Jewish population is mixed from a hundred countries with as many languages. Israel’s Declaration of Independence ensures complete equality of social and political rights to all inhabitants irrespective of religion, race, or gender. Israeli Arabs, Muslims, Christians, Druze and other minorities enjoy the same civil and political rights as Jews. They serve in the Knesset and in the High Court of Justice and can speak freely against the government. Israel’s 1.2 million Arab citizens live in relative wealth and enjoy human rights far above their brothers in any of their 23 Arab countries.

The castigation of Israel as an apartheid state is a sophisticated propaganda tool, without much basis, used both to libel Israel and to cover up to the abhorrent human right records and racism of Israel’s principal accusers like  Sudan, Saudi Arabia, Syria, Libya, the Palestinians and Iran. Even in that alleged bastion of racial freedom, Britain, the BBC reported that society is becoming more divided by race and religion, fully fledged ghettos happen there, and the Independent Race and Refugee News reported 52,694 racist incidents in 2004 and alarming increase also in racially motivated murders.

Israel has demonstrated historically unprecedented goodwill towards to along its whole existence, when while being involved since its birth in existential wars with Arabs, has never exerted any limitations or punitive measures on its Arab minority akin with the enemy – like all other countries on earth have invariably done.

Israel invited and has been absorbing lovingly and without any material gain 100,000 Ethiopians with Jewish roots; poor and oppressed black Africans – unprecedented again in the history of mankind. Proportionally it would be welcoming 5 million black Africans in the US or in Europe within a few years.

Tiny Israel was the first to give home to hopeless Vietnamese “boat-people” in the 70-s and since 2005 similarly to refugees from genocide in Darfur, Sudan, mostly black Moslems. Several newly created Israeli voluntary organizations are providing care and assistance to them.

An article in News.Scotsman.com of March 4, 2006 tells the personal story of a Darfurian, working in a kibbutz. Despite being jailed for a year before reaching that kibbutz, Sanka is remarkably upbeat about living in the Jewish state. “The Israelis are really a free people, with an open mind,” he said. “The Jewish people I’ve met understand my plight. Funnily, for the first time in my life here in Israel I feel free”


Unfortunately some greedy politicians and frustrated academicians make a living of libeling Israel as ‘apartheid’. But, let’s leave alone theoretical arguments. Within a few hours spent in the quarter-million strong Israeli city of Haifa one can visit a few shopping centers, the city’s best hospitals, a children’s Luna Park and the Haifa beach; to see Muslim and other minorities strolling and mingling leisurely everywhere. You yourself can judge and choose between the validity of actual co-existence in Israel or of singling out Israel as the “apartheid state”.

We are often asked “what side are you taking” and we have to explain that we take only one side- always – the side of Truth and Humanity. This is not about Hamas, it is not about Gaza or Israel or Palestine, it is not about Judaism of Islam… this is a story of terror and bullies. No matter what you think of the current round of the “Palestinian – Israeli conflict” one thing is common to both “sides” – the terror of Hamas.

You see Hamas is not a political entity. It is a terror organization, defined and acknowledged as such by the United States, the EU and other countries. It was “elected” by the Gazans but it has been ruining their lives.

Despite the barrage of rockets on Israel which is the reality for thousands of Israeli civilians (women and children) since 2005, Israel has been continuously supplying Gaza with power, water, food, medicine and other fuel. If you need a reminder, in 2005 Israel left the Gaza strip, tearing up entire settlements, uprooting thousands of families from their homes to give it “back”. Israel could have gone for the “scorched earth” strategy but it didn’t. It left behind fields, greenhouses, industry and agricultural areas – for the Gazans to take over and cultivate, for them to build a good life for themselves. Yet, Hamas forbade the Gazans to make use of what was left and tore it all up.

Hamas made sure that its subjects are kept in misery, poverty and that they have a common “enemy” to hate, or else they would not be able to rule them.

Hamas has since fired over 11k rockets (and when we say “rockets” we do not mean just mortars and shells but long range missiles too) into Israeli civilian areas. Hamas was unprovoked, yet it targets Israeli civilians. The IDF wasn’t in or near Gaza, yet Hamas targeted Israeli Civilians.

Hamas created and maintained a humanitarian crisis in Gaza so it can claim the international sympathy for the “poor” Gazans. It embezzled funds sent by the UN, the EU and the US to help relieve the humanitarian crisis to acquire ammunition and construct a vast network of underground tunnels reaching all the way into Israeli settlements well beyond the border…

All the while Gazans are starving and dying while their “leaders” drive luxury cars and live in palaces.

There really does exist a humanitarian crisis in Gaza. But Israel did not create it. Israel does not maintain it. Israel would want more than anything to end it. But it is not in Hamas’ best interest.

If you have any common sense you will understand that we are right in our call to try Hamas leaders for war crimes, and you will sign our petition and help us spread the word.